Geared to Grade 3.5-4.5 players, the entire workshop (Friday evening and all day Saturday) will be held in full ensemble under the direction of our guest conductor, Gareth Jones. After the Friday evening sight reading session, everyone is invited to the Communitea Café for a closed party featuring our own jazz jam. Our rhythm section will lay down the beat and all are welcome to join in or simply listen and socialize with friends.

Saturday rehearsals will run from 9:00am to 4:00pm. Coffee breaks are provided and everyone goes out to find lunch at any of the terrific Canmore eateries. The workshop will conclude with an informal concert at 5:00pm. 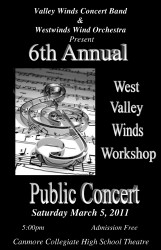 If you can’t attend the full workshop, drop in to the free concert to join in the fun and hear some great music!

From the Guest Conductor:
“The Adult Band Workshop that I did for you was the highlight of last year’s season for me. I don’t remember when I’ve had such a satisfying and rewarding experience. The band was so responsive and fun to work with. Thanks for allowing me to be a part of such a unique and wonderful venture.” Clinton Marshall

From Participants:
- Great conductor. He really raised the bar for this workshop and accepted no less than your best.
- I thoroughly enjoyed the workshop. The director was fantastic!
- Excellent workshop – director was awesome! Thank you!

Gareth studied trumpet at Northwestern University, where he won the prestigious concerto competition and a scholarship for performing excellence. He studied conducting at the Pierre Monteux Institute and Canada’s National Arts Centre and received his Master of Music in conducting from the University of Calgary.

Gareth has studied conducting with the renowned pedagogues Jorma Panula, Gustav Meier, Michael Haithcock and Michael Jinbo.  As a conductor, Gareth founded the Calgary Honour Band and the University of Calgary Brass Choir. He was also a founding member of the chamber ensemble “Rosa Selvatica” and has been a featured soloist with the Calgary Philharmonic Orchestra on several occasions.

He can be heard playing chamber music, jazz, blues, and rhythm and blues with various groups around Calgary as well as returning to perform with the Calgary Philharmonic on occasion.