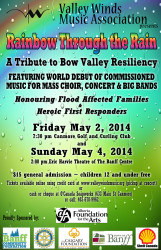 Join Valley Winds Music Association at our Spring Concert highlighted by the debut of “Rainbow Through the Rain”, an amazing piece of music composed by Canadian composer, Jeff Christmas, for the unique instrumentation and voices of the VWMA choir, concert and big band.

“Rainbow Through the Rain” was commissioned by the Valley Winds Music Association as a tribute to the resiliency of the Bow Valley residents after the devastating weather of last June.

We are thrilled that Jeff Christmas will conduct this debut of our first commissioned piece as we honour the affected families and the heroic first responders and heavy equipment operators who helped contain the flood damage.

Jeff Christmas’s original compositions for a wide variety of ensembles are in demand internationally. His music for the Opening Ceremonies of the Canada Games premiered on national television in the summer of 2001. Jeff has worked on various feature films and television programs as composer, orchestrator and musical assistant. Television and film credits include High Point Casinos (Global TV), National Aboriginal Achievement Awards (CBC) and “Chatroom” (HBO, BET). His most recent commissions include Bluewater Portrait for solo oboe and orchestra, and Canadian Voyage, a five-movement suite for french horn and orchestra…and now “Rainbow Through the Rain”.

Come and commemorate our spirited community with the members of the Valley Winds Music Association!