Cochrane Music Society’s choir, Choral Waves, and the Airdrie Community Choir are participating in a Kantorei choral workshop March 4-6 under the direction of the acclaimed conductor, Diane Loomer. The workshop concludes with the concert “With a Voice of Singing”, a performance of choral favourites from classics to folk songs and spirituals.

This is a wonderful opportunity for Choral Waves members to experience singing in a larger choir and for the CMS band members to appreciate the talent of our choir and others. The performance will feature the individual choirs (Kantorei directed by David Ferguson, Choral Waves directed by Rob Billington and Airdrie Community Choir directed by Paul Grindlay) as well as the combined choir directed by Diane Loomer. For a truly enjoyable Sunday afternoon, take in the concert of the “Kantorei and guests” choir.

Choir members please note that the workshop venues have changed:

Mount Royal Kantorei is the adult choir of the Choral Program at the Conservatory of Music at Mount Royal University. Formed in 1995 by well-known and highly-respected Artistic Director David Ferguson, Mount Royal Kantorei is committed to strengthening the musical and vocal skills of its members within a challenging framework of choral masterworks from all eras, and to exploring the wealth of Canadian choral repertoire available for the adult voice.

An auditioned choir of 80 mixed voices, Kantorei is open to all singers who meet vocal and musical expectations assessed through auditions in Spring and late Summer of each year. 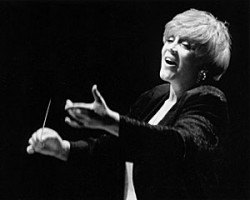 Diane Loomer, C.M., is internationally recognized as one of Canada’s leading musicians; a sought-after conductor and clinician on the international choral scene with engagements taking her to all corners of the world.

She is founder and conductor of Chor Leoni Men’s Choir and co-founder and co-conductor of Elektra Women’s Choir; she has taught on the music faculty at the University of British Columbia. Both her men’s and women’s choirs have repeatedly won first prizes in national and international competitions. Her choral compositions have been published and recorded internationally, and she frequently appears on CBC national radio as a spokesperson for the classical arts.

The first woman to conduct the National Youth Choir of Canada, Diane received the Healey Willan award in 1990 for her service to choral music in British Columbia; in 1994, she was named YWCA Vancouver’s Woman of Distinction in Arts and Culture; and in 1997 and 2004 received Distinguished Alumni Awards honouring her achievements in choral music. In 2002 she received the Queen’s Golden Jubilee Medal for her significant contribution to Canada’s culture.

Diane has conducted several ACDA State Honour Choirs and has conducted Provincial Youth Choirs and Honour Choirs in every province in Canada. In 2003, Diane was appointed by the University of Victoria to the University Women’s Scholar Lecture Series and in 2005 was appointed Conductor Emeritus to Dalhousie University in Nova Scotia. With the help of her husband, Dick, she has established Cypress Choral Music as a thriving source of new Canadian choral music and an encouragement to Canadian choral composers.

In recognition of her achievements in and service to music and humanity throughout Canada, in 1999 Diane was thrilled to receive the country’s highest civilian honour, the Order of Canada.